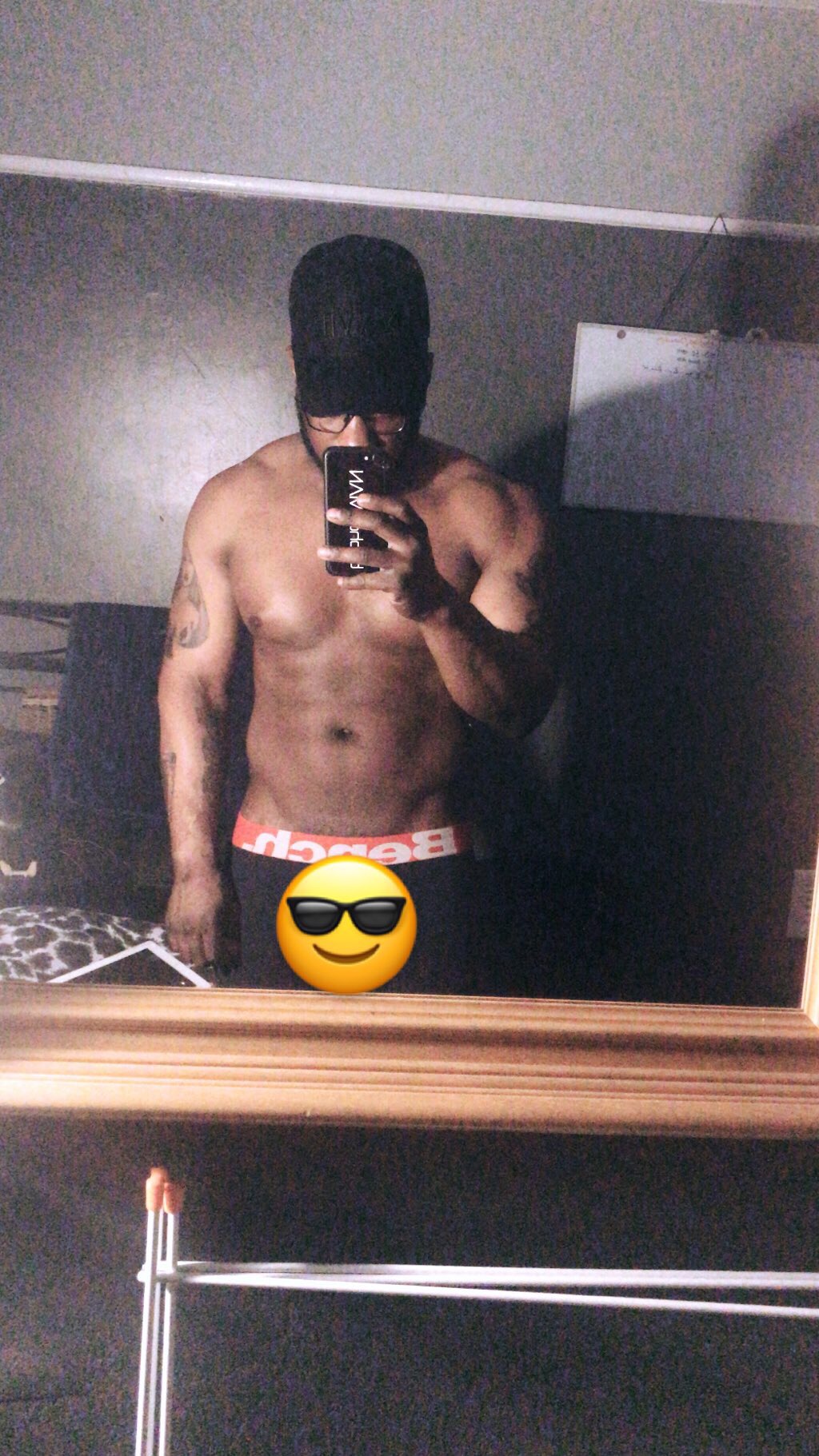 For those that read last month’s entry, welcome back. For those that are new to #OperationIdris, welcome. You can check out the previous entries here. After the shocker that was May, I had to come with some serious precipitation. Sh*t had to be as cold as a mid-mornin’ mist that came back with a bang… I know you caught that one! I always find a way to flex lyrical even when I’m talkin’ about the physical. Though there were some erm.. glitches, in comparison to May, June was a stellar month. This month, I introduce to you: #OperationIdris – Month 6.

Before we jump in, throw two plates either side, lay back ‘n’ lift the bar with no spot, there’s a few tings we affi address:

20MSM = 20 minutes Stairmaster – (I’m convinced the Stairmaster ‘n’ the Hack Squat were co-designed by God ‘n’ the Devil to punish gluttonous sinners. Forgive me our father who art in heaven ‘n’ let the punishment not be too severe o Dark Lord.

Saturday’s ‘Abs/Calves/20MSM’ session in Week 25 didn’t happen. In truth I created the table from a couple weeks back, ‘n’ had everytin’ up until “we affi address” written then laid back as life got in the way. Then after Friday’s ‘Arms/Abs/20MCT’ session in Week 25, in typical “maybe should have stopped at the 8th drink” LeBeau mode, ended up in a likkle mazzine resultin’ in self-inflicted pain. I lashed out at an innocent bollard ‘n’ re-injured my already “I should have had an MRI by now” knee. The effects of which caused me to skip gym ‘n’ work the first week of July as I couldn’t walk. I only have myself to blame. Bright-side, I binged on Lucifer all week and started plannin’ some ‘bts’ moves ‘longside some dope individuals. All in due time.

Now we got that out the way, let’s jump in. First, let’s address the elephant in the room. I know what you’re thinkin’:

“Why did you jump back to bro split after doin’ PPL?”

“That’s a beginner split ain’t it?”

In short. Yes. ‘N’ no. I’ve always been an advocate of trial and error. What works for you, may not work for someone else. Vice versa. I know individuals who have consistently trained for multiple years who swear by the ‘Bro-split’. Some who swear by ‘Upper/Lower/Power/Hypertrophy’. Others by ‘PPL’. To each their own I say. In reality, these trainin’ splits are due to lifestyle/work/personal life habits as well. Mr Bro-Split’s lifestyle may accommodate 5 days in the gym wherein he can hit each muscle once a week under intense pressure. Miss ULPH’s work balance may mean on 2 lunch breaks a week, she can hit an afternoon session, then use both weekend days to finish the split. ‘N’ lastly, seein’ as they’re influencers unbound by the shackles of a 9-5, the Bae Team can hit up the gym 6 days a week on the PPL hittin’ each body part twice.

So, to answer your original question as to why I jumped back. To keep it one hunna I was gettin’ bored. ‘N’ the motivation was slippin’. Go back to May ‘n’ you will see how shambolic that month was. Though it truly was dire, I thoroughly enjoy ‘PPL’. At the point of writin’ this entry (July), I’ve actually switched back to it. Seein’ as you hit each body part twice a week like a baaawse, I made some slight tweaks so all is good now. No complaints here. I think also coupled with the fact I started trainin’ at 6pm 3 days a week to accommodate Cee played a part in the miserable month that was May. I had gotten used to trainin’ at 7am before work and gettin’ it out the way. Then when I started trainin’ in the evenin’ I wasn’t really lookin’ forward to it.

Anyhow, let’s break it down week by week.

Boom. Week 21. I got off to to blinding start. Convinced I wasn’t gonna have another stir-sh*t month, It went as well as I could hope. Though the ‘bro split’ is a 5 day program, my body could accommodate 6 days. Saturdays were designated as Abs/Calves/Cardio days. In truth, I was suppose to hit 3 double sessions, but as you can see, I only managed one. It takes some real grit to hit doubles. Are they necessary? Again, to each their own. I still want the year-round lean aesthetic, but I also like oreo milkshakes. I want chiseled abs, but I also love cookie-dough ice cream. I wanna be able to hit a beach holiday at any point of the year, but I have no desire to leave tiger bread alone. I also do enjoy an alcoholic beverage. Or 9. All in moderation I say.

Truth is, I don’t desire to compete. I’m a regular guy enjoyin’ a balanced lifestyle. Since January, bar the week off I had in July, I’ve trained every week. Also, in an average month, I train 4-6 days a week, anywhere from 1hr-2hrs per session inclusive of weights, cardio and abs. I allow myself to ‘indulge’ with food if not once a week, once every two weeks. ‘N’ even those indulgences are usually bigger portions of my regular meals rather than bingin’. I’m enjoyin’ the journey. The destination is irrelevant at this point.

Week 22 – I made a tactical decision. I decided to hit legs on Mondays – for a couple reasons. One, legs are my least favourite body part to hit since my injury. My quads are wham so don’t @ me. S*ck an un-poached egg if ya wanna chat bout my calves. They’ve actually shown progress. Since I can’t physically can’t squat without pain shootin’ from my right knee, ‘leg press’ has been my main leg exercise since Jan. Two, Monday is ‘international chest day’. I cba waitin’/sharin a bench. I’d rather walk in the gym on Monday evenin’ knowin’ the ‘leg press’ is waitin’ for me like a tumescent tinder date that’s given consent for me to strap in ‘n’ give her multiple reps. Though I skipped this week’s cardio session with Arms and Saturday’s session (probably hungover), I managed to hit a double on the Monday so all was not lost.

Week 23 – I dub this week as the week I nearly made the May slip. I’d be lyin’ if I said I recall my pysche on each day, but I remember feelin lethargic ‘n’ thinkin’ I cba with this each session. No cardio that week as you can see. I can’t even recall why I missed the Monday ‘n’ the Saturday, but again, not every session/week is gonna be amazin’. But we push through. You have to push through.

Week 24/25 – What a glorious fortnight. The weekend of Week 23, I told myself: “I cba with doubles anymore – don’t torture yourself.” What I meant by that was simple. I wasn’t goin’ to schedule doubles as part of my program anymore to only hit them one out of three sessions. Lowe that. Instead, I’d stick to my main program, ‘n’ if for whatever reason I felt an extra surge of energy, the need to let off some steam, or I was simply bored, then you can go hit a cardio n ab session. I decided to look at it as a bonus. Not mandatory. There were two major things I am proud of durin’ this fortnight stint.

One, I remained consistent. Yes as mentioned earlier, I didn’t hit Week 25’s Saturday due to injury, but consistent I was. The workouts were determined, I had no fatigued, and I looked forward to each one.

Two, I decided to hit abs everyday again. Some may say it is unnecessary. Again I say, to each their own. Yes I do believe one can over train which is never good. But I say push your limits. Only when you’re at the precipice will you know your breaking point. I enjoy hittin’ abs each day. Will hittin’ abs everyday give you that defined core? Probably not if it isn’t done in conjunction with a calorie deficit ‘n’ cardio. But, my core got stronger each week which helped with my main compound lifts n’ overall balance and stability. Also, I kept it simple:

Whatever exercise I was doin’, I’d simply do a set of abs in between. So for example, if I was hittin’ flat barbell-bench, I’d do a workin’ set of 90kg x 12 reps and instead of simply restin’ before the next set, I’d use that time to hit a set of plate obliques ‘n’  repeat. Gotta be economical with your time. I enjoy trainin’, but I’m not tryna move into the gym. I got sh*t to do.

Diet wise, though I’ve maintained the core meals ‘n’ structure (check month 2’s post here), I’d say I’ve deffo been more flexible in recent times. Based on Month 2, I’ve swapped out peanut butter in my shakes for a banana ‘n’ or a handful of strawberries. Also, I no longer have carbs with my evening meal, just a wedge of veggies and some form of protein – (chicken/beef/fish). But I’ve been doin’ that for around 3 months now. And yes, much to the ‘Lone Wolf’s’ annoyance, I’m still not trackin’ macros. Sue me.

I took this pic around 3 weeks ago I think. Need to sort that bush out. Until then, ‘meet me in the trap’. Thanks for readin’.

Begin typing your search above and press return to search. Press Esc to cancel.